With the special exhibition "PERFECTLY FORMED – The Ceramic Design of Hans-Wilhelm Seitz" the Porzellanikon honours one of the most important porcelain designers in Germany and the region.

In his studio in the North-Eastern Bavarian porcelain region, the now 75-year-old global player works for national and international clients. With an open worldview, he created award-winning household and hotel tableware designs for the porcelain factories Bauscher, Arzberg, Schönwald or SKV Porzellan-Union Schirnding as well as for a Vietnamese and Greek company. The anniversary exhibition shows a cross-section of Hans-Wilhelm Seitz's extensive oeuvre on around 300 square metres, with not only the most important porcelain items for everday use of the porcelain designer on display, but also his roof tile designs for the Erlus AG in Neufahrn.

His timeless tableware is used by people all over the world. In his studio in Marktredwitz, the ceramic artist has been creating household and hotel tableware designs for national and international clients for 45 years and - something unknown to many - also roof tiles. The fact that the global player has remained down-to-earth despite significant successes distinguishes him in a special way.

Shortly before the Coronakrisa began, the television team from BR visited us and shot this great report about our new special exhibition "PERFECTLY FORMED – The Ceramic Design of Hans-Wilhelm Seitz". Have fun on the discovery tour.

Exciting look behind the scenes: Setting up the exhibition "PERFECTLY FORMED – The Ceramic Design of Hans-Wilhelm Seitz" at the Hohenberg site on the Eger river. The colour red as exhibition colour underlines the passion for porcelain. 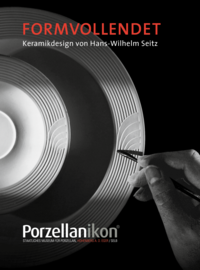 A detailed publication accompanies the exhibition.

Initially, Hans-Wilhelm Seitz completed a ceramic modeller apprenticeship at the Rosenthal Technical Works in Marktredwitz. He then attended the porcelain technical school in Selb. In 1966, as a state-certified mould designer, he went to the automotive industry in Cologne (to Ford). But only two years later he worked again as a modeler in the porcelain industry in his adopted home. A very important station for him was working in the studio of the industrial designer Hans Theo Baumann. There he gained direct insights into the professional practice of a versatile designer, into his organisation and work processes. Since 1975 Hans Wilhelm-Seitz has had his own studio in Marktredwitz.

Many of the products he has designed are award-winning and our households would be unthinkable without them, such as Arzberg's popular "Daily" service from 1988 - one of his most successful household crockery. It is characterised by a functional, functional and aesthetic design that focuses on timelessness. Seitz is thus fully in the tradition of "good form", always gearing his designs to modern needs - an approach that determines the designer's entire work. For the catering trade Seitz has designed tableware that is part of the absolute standard of any hotel and restaurant equipment, including the "Carat" service by Bauscher (1986) and "Generation" by Schönwald (2003), which are still in production today and have become classics. #hanswilhelmseitz  #hanswilhelmseitz